The Savannah cat breed is a wild African cat, that has a medium size and large ears. That breed of cat is crossing between a serval and domestic cat. At the end of the 1990s, the largest breed of domestic cat breeds became very common. On the 7th of April of 1986, the first Savannah cat was produced from crossbreeding a Siamese domestic cat with a male serval cat. In 1996, the Savannah breed’s initial version was written and presented to the TICA (The International Cat Association). In 2001, the unusual cross was accepted as a new registered breed with certain standards like only spotted types with color combinations and certain colors, despite the fact that this breed can come in different patterns and colors.

Savannahs have slim and tall builds giving them a greater size appearance than their actual weight. In fact, there are 2 generations of that breed, F1 and F2 generations. F1 hybrid male Savannahs tend to be larger than females as well as the largest. As it is known, most cats of the early generation will have several of the exotic traits of the serval, while in later generations, these traits often diminish.

First-generation Savannah cats can weigh 8-23 kilograms, whereas the upcoming generation is usually between 2.5-8 kilograms. The random factors in Savannah genetics can cause size variation even in the same litter. The only coat, that is accepted, has to be a spotted type only. The breed standard of The International Cat Association calls for black smoke, black, silver-spotted tabby, and brown-spotted tabby only.

Nowadays, TICA has not permitted any domestic outcrosses for the Savannah breed because championship status has been achieved. Savannahs are known for many distinguishing serval characteristics. This breed has an exotic look, hooded eyes, puffy and fat noses, very long legs, erect, rounded, wide, cupped, deeply, and tall ears, as well as various color markings. The cat has a slender and long neck. The wide head is shorter than the small, as well as the body is leggy and long. This cat has a short tail with black rings and a solid black tip. Its eyes could be blue-green, gold, brown, or a blended shade in the adult with a “boomerang” shape.

These loyal cats will follow their parents around the home. Breeders can train them to walk and fetch on a leash. Exposure to Savannah kittens to other dogs and cats and people would make a big difference in their sociability as they grow up because some reports state that Savannah kittens might exhibit anxious and fear behaviors and begin to hiss when they see someone stranger. On the other hand, some Savannahs are very friendly and social when they are first placed in their new place. Those behaviors mostly depend on breeding and training these cats at a very early age, as they will carry these behaviors to adulthood.

Savannahs love to jump and reach high places, such as high cabinets, top of refrigerators, and doors. Some cats can hop about eight feet high when they are only standing. These inquisitive cats usually learn how to open cupboards and doors. As a savannah’s owner, you have to take distinct prudence to prevent any unexpected troubles. Many cats of this breed love splashing, playing, and even immersing themselves in water, it will be a great idea to shower with your savannah cat.

Many purebred cats are prone to have (Hypertrophic cardiomyopathy), HCM. Also, these big-sized cats have small livers in comparison with domestic cats as well as their big body. However, there is no medical consequences have been proved yet about that issue. Anyway, these hybrid cats do not need any more specific requirements for medical curing than pet cats have. For example, they have the same blood test as the normal pet cats have, regardless of their serval genes. It has been found that the antagonist atipamezole, butorphanol, medetomidine, as well as Ketamine are totally safe for use in servals. Many breeders agree that the average domestic cats need to have less taurine than Savannah cats and therefore recommend taurine supplements, that can be got to any type of food.

Every state in the US has its own ownership laws of Savannah cats. The common code, that is followed, is that which the US Department of Agriculture has set. That code defines domesticated or wild hybrid crosses considered as domesticated. However, many restrictive laws have been set by some states, about breeding hybrid cats, including Georgia, Texas, Massachusetts, and Hawaii. 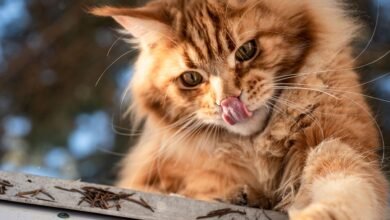 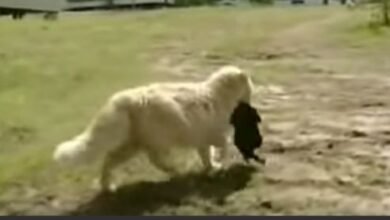 A Litter Of Puppies Were Just Born, But The Neighborhood Cat Stole Them All